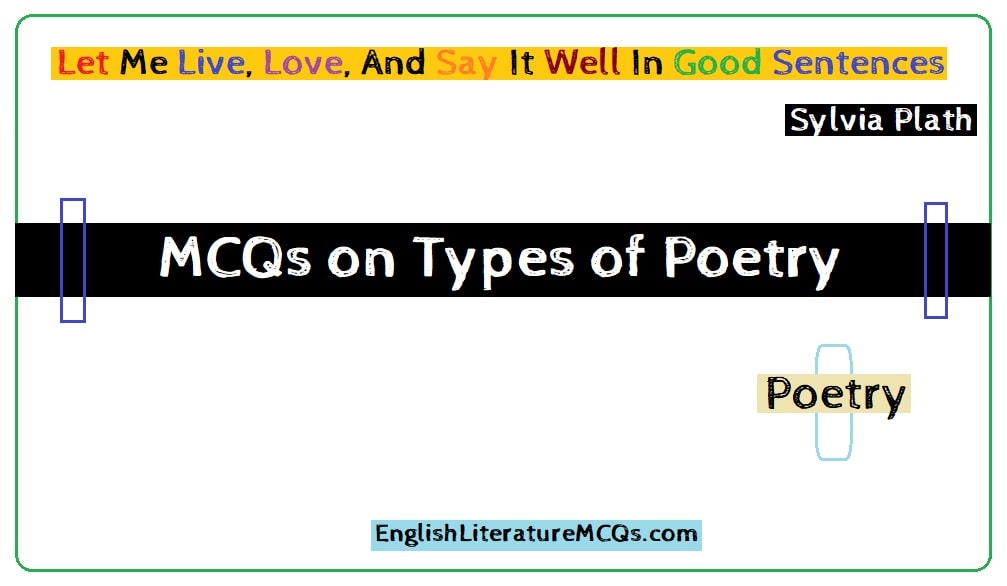 Introduction To Types Of Poetry

Poetry is a form of literary art in which language is used for its aesthetic and evocative qualities in addition to its apparent meaning. Specific poetic forms or types of poetry have been developed by many cultures. In more developed, closed or received poetic forms, the rhyming scheme, meter and other elements of a poem are based on sets of rules, ranging from the relatively loose rules that govern the construction of an elegy to the highly formalized structure of villanelle. Here, some common forms of poetry are described in the form of MCQs. All MCQs on Types of Poetry questions and answers are published according to the new study syllabus for academic year 2021-22.

Read More: MCQs on Poetry in The Age of Pope

The objective questions on Types of Poetry MCQs includes critical history of English Literature from the Beginning to Post Modern & Post Colonial Literature in different posts of englishliteraturemcqs.com preferably for the preparation of NTS, FPSC, PPSC, PCS, CSS, B.A, B.A(Hons), M.A, M.Phil, Phd, Teachers & Lecturers Entry Tests and all other competitive examinations in Pakistan and also for foreign students and foreign study.

Q1. Which is a form of narrative verse that can be either poetic or musical?

Q2.  The poetic form which represents a melodious form of story-telling is:

Q6. The poetic form concerned with feelings and emotions and is also refers to the broad category of poetry is?

Q7. Which type of poetry expresses the thoughts and feelings of the poet?

Q8. The type of poetry, which expresses intense personal emotions in a manner suggestive of a song is:

Q9. “Annabel Lee” is the lyric poetry of:

Q10. A poetic form, is a monologue in which a character speaks to him or herself expressing inner thoughts is

Q11. By definition which poetic form is not a poem?

Read More: MCQs on Prose Of The Age Of Pope

Q12. Soliloquy is most famously seen in the plays of:

Q13. Which poetic type is a five-line poem that consists of a single stanza?

Q14. Rhyme scheme of Limerick is:

Q15. The subject of which poetic form is a short, pithy tale or description?

Q16. Which is a short poem, descriptive of rustic life and is written in the style of ‘Theocritus’ short pastoral poem the “Idylls”?

Q20. Originally a variation on a pastoral, which poetic verse describe obsessions and other intense subject matters?

Q21. “Do Not Go Gentle Into That Good Night”, is a villanelle written by:

Q22. Which poetic form has been used regularly in the English language since the late nineteenth century by Dylan Thomas, W.H. Auden and Elizabeth Bishop?

Q23. A poem in which the first, last or other letters in a line, spell out a particular word or phrase is called:

Q24. An acrostic poem by Lewis Carroll is:

Q25. Which was the principal forms of music and poetry in 14th and 15th century in France?

Q26. How many main stanzas are in ballade, each with the same rhyme scheme?

Q27. Three main stanzas with a shorter concluding stanza or envoi is found in:

Q28. All four stanzas of which poetic form have identical final refrain lines?

Q29. The poetic form which tone is often solemn and formal, with elaborate symbolism and classical references is:

Q31. Which poetic form has six stanzas, each comprising six unrhymed lines, in which the words at the end of the first stanza’s lines reappear in a rolling pattern in the other stanzas?

Q32. The poem ends with a three-line stanza in which the words again appear, two on each line is:

Q34. Which type of poetry is composed of a series of quatrains; the second and fourth lines of each stanza are repeated as the first and third lines of the next?

Q35. Who devised the roundel form?

Q36. Which literary device is consists of nine lines plus a refrain after the third line and after the last line, the refrain being identical with the beginning of the first line?

Q37. Collection of quatrains is:

Q38. Rubaiyat is a four-line verse (quatrain) practiced by which poets?

Q40. Which is a Persian form of poetry?

MCQs on Jane Austen As A Novelist Of The Romantic Age